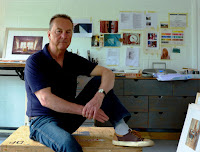 David Poxon was born in the Industrial heartland of England, but now makes his home in the rural countryside of Shropshire. U.K. He is an elected member of the prestigious R.I. (The Royal Institute of Painters in Watercolours). He is also a signature member of N.W.S (The National watercolour society of America). In 2015 David served on the jury of selection for the NWS in Los Angeles.

Over the years he has won many awards and accolades for the precision and craftsmanship of his paintings. He is the author of two books on drawing techniques, and has contributed many articles to the Art Magazine press and has appeared in numerous art books world wide.

Painting in pure watercolour medium he uses a painstaking multi glazing technique, with sometimes up to 20 layers of transparent paint, each in turn delicately modulating the colours beneath. There is no white paint used at all in any of his works preferring instead to preserve areas of the natural paper, his paintings can take many weeks in the making.

A recurring theme in his work is the reclamation by nature of that which man has created and abandoned, finding renewed life between object and environment. 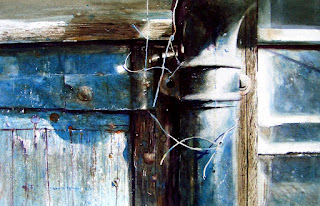