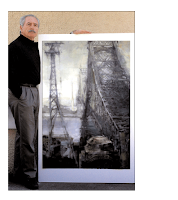 In 1947, when I was seven years old, my parents, five brothers, two sisters, and I came to New York City from Italy. We travelled seven days on a freighter and landed on Ellis Island.

That moment of entry on December 7, 1947, is still vivid. As we passed through immigration, I remember straining to see New York harbor through the windows of the processing center. In the distance, thousands of glowing lights dotted the skyline. The metropolis beckoned, and I intuitively grasped the promise, excitement, and staggering immensity of the place.

Today, I have no doubt that my deep feelings for the city derive from those first indelibly imprinted and magical moments. As an artist, I found that I wanted, somehow, to replicate on canvas those first sensations. Conversely, I also wanted to convey how the metropolis’s incomprehensible vastness and richness can sometimes make one feel (especially an untested seven year old) small and insignificant.

About a decade ago, I began a series of paintings that mainly focus on the bridges of New York City. The first bridge I painted was the 59th Street (Queensborough) bridge. I have a particular attachment to the 59th Street Bridge because in the early 1900s my grandfather Francisco Masi was one of the multitudes of Italian laborers who hauled steel girders to build it. Many years later, I learned that the bridge opened in 1909 and that more than 50 people had given their lives to building it.

He has had feature articles in The Artist’s Magazine, Watercolor Magazine, American Artists, PBS- “Sunday Arts”, NBC-TV “Weekend Today in New York”,
published in many issues of “Splash”, The New Times, Sept. 2008 article titled “A Painter’s Brush With the Bridges of New York”, Newsday feature in Aug. 2008,
“Bridgemaster”. In June 2009 a solo exhibition for “The New York Centennial
Commission of the Quensboro Bridge”, in 2010 a solos show at the “Forbes Gallery
In New York City”, solo exhibition at The New York City Transit Museum, in 2012 solo show at “The Salmagundi Club of New York” and The New York Times video   Sept. 2014 titled,” Living City: A Tale of Two Bridges”.

In 2009 Masi won the “High Winds” award in the annual AWS Exhibit, he is a recipient of “The Dolphin Award” and numerous other awards during his career.

He is currently President of the American Watercolor Society. 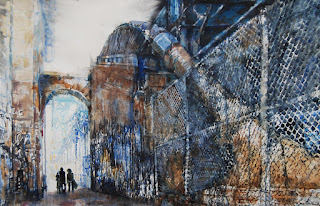