American- born Sandra Walker is an adherent of the Photorealistic school of Richard Estes and Chuck Close.

Before turning to painting full time she worked on Capitol Hill in Washington, D.C. For Senator Edward Kennedy. While on the Kennedy staff she was commissioned by the U.S. Mint to design the Congressional  Medal which the President presented to Simon Wiesenthal at a White House ceremony.

Since moving to England ,  Walker has been awarded Britain's most respected watercolour prize, the £15,000 Singer and Friedlander/Sunday Times award for Best British Watercolour.

In 1999 Walker became an elected member of the prestigious Royal Institute of Painters in Watercolours.

Walker has exhibited her work  throughout the world and is represented in the collections of the National Geographic Society, Senator Edward Kennedy, Senator George McGovern, theNational League of Cities in Washington D.C., the Wall Street Journal, the American Embassy, the Canadian Embassy, the Kingdom of Saudi Arabia, Margaret Thatcher (commission for Thatcher Foundation),  John Le Carré, Worcester College - University of Oxford, and many private collections.


Her work has been used as set decoration on American TV series "Glee". 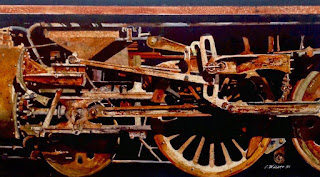