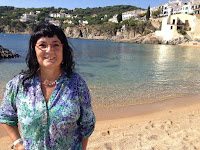 Angela Barbi was born in Girona (Spain) where she lives at present, she also lived in The Netherlands for three years as a child, and has travelled extensively.
From a very young age she started drawing and painting, later on she received tuition in classical drawing and expressionistic painting, she following the anthroposophical school of Rudolf Steiner and Beppe Assenza according to the theory of colours by Goethe, which is really her passion. She has also followed training with some Spanish and International painters for many years.
For over 25 years she was an English teacher at a secondary school, combining the painting with her teaching tasks.
At present she manages her own business "Enjoy Painting Catalonia" or EPC ART COURSES that organizes watercolour painting holidays in Spain and other countries, tutored by several of the best renown watercolor masters in the world.
She has exhibited in several collective and individual exhibitions in Spain, Greece, France, Turkey, Slovenia, Italy, Albania, Indonesia, India and China. In 2016 she has exhibited in Pakistan, Albania, USA, Serbia, Bulgaria, Hong Kong and Hungary. She’s the member of a number of art societies and she has been a juror for the IWS International Watercolour Contests (2013, 2014, 2015). She’s a member of IWS Spain that she founded in 2014. 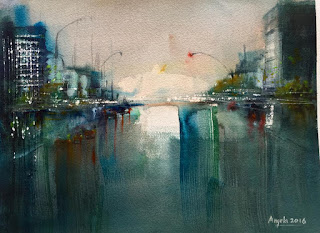 The city in green, watercolor