I am the president and founder of IWS Holland, a foundation that  wants to put on the map the watercolor in the Netherlands. I am a member of the ACN (Watercolor Collective Netherlands) and the Belgian AIB.

I won several awards during my long watercolor career . The most recent were in 2015 : the 2nd prize at the Painting of the year contest in the Netherlands and reaching the semi-finals in the global competition of the magazine Art de l'Aquarelle. in 2016 I was in the top 20 (19th) in the IWS Worldwide Competition . In the Fabriano big  watercolor contest I won as a team with my Dutch collegues Jan Min and Carla de Korte The Fabriano paper award as well as the award of Escoda brushes

I am participating  in several major exhibitions along the world . In the past two years in Antwerp, Mons, Libramont, Thessaloniki, Fabriano, Slovenia, New Dehli, Varna, Alessandria, Coquelles, Vancouver, In the Netherlands in Amsterdam, Utrecht, Middelbeers  and Driebergen.

In 2013 I was the face of and on the watercolorset of the Talens brand in a special limited edition. 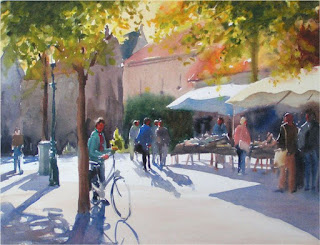