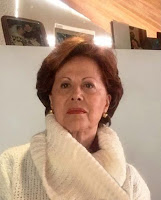 Architect by profession and Teacher by calling at the National Autonomous University of Mexico’s Faculty of Architecture.

She teaches for the pleasure of sharing her knowledge with young students, and for the honor of being part on the UNAM.

Architect Palacios started practicing Architecture even before graduating, combining painting whenever there was time to.

To her, surroundings disappear while working on either architectural design or painting; however, for decades she devoted most of her time to her career and family, not being able to fully embrace her true passion.

In 2005 she had the opportunity to learn the art of watercolor, finding through it a natural way to express the lightness and strength from her imagination.

Then began a strong and profuse period fulfilling a need for aesthetic expression always latent in her.

Living in a city immersed in social dynamics and large avenues, permanent agglomerations and common areas of intense activity, Olga decides to represent the urban landscape of Mexico City and its outer always with the sense of speed that 21st Century imposes.

She investigates and represents her City wondering: What's in it? Who lives there? How do people interact in there? What are its effects on them?

In her world she displays reality adding contrasts from that urban world hitting us, as night passes, with it’s reflections, glare, speed effects on bright and dark asphalt and piercing red accents… That daily claire-obscure that thrills her.

Quoting Artist Jorge Marín:
“…by freezing everyday situations like a broken vase, Olga does not only portrait a true addiction for an impeccable managed detail, but also reveals an implicit desire to re-evaluate reality to get it into a niche of art, understanding, accepting and becoming part of it.” 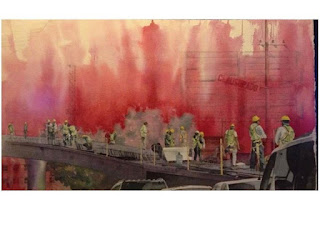