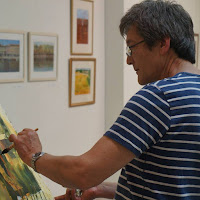 I have an affinity for buildings born from an earlier career in architecture and more recently in architectural illustration, with watercolour being the medium of choice for most illustrators for reasons of speed and convenience. I am entirely self-taught, both as an illustrator and artist.
But my paintings are quite separate from my illustration work. Although they share the same medium, with the former I am free to explore the medium to its limits without the constraints of a client’s wants and needs. I found this freedom quite daunting initially and, in my experience, even good illustrators rarely make good artists because of the difficulty in breaking away from the habit of drawing the lines and colouring in.
My approach is quite dynamic, applying paint at speed, moving and adjusting washes as I progress. I am happy to use white pigment for small highlights and never use masking fluid, which to me is akin to applying the final decorations to a cake before it has been baked.
The architecture itself is of secondary importance in my work. It is just a vehicle for the effects of light and shade, and I approach a streetscape as I would a landscape. I use colours for dramatic effect rather than trying to reproduce them literally, thinking mainly in terms of warm and cool, and often working with a simple triad of primary or secondary colours.
I find watercolour a medium of endless possibilities and feel as though I’m just scratching the surface. I play with it constantly, trying different brushes and exploring ways of applying paint (as well as removing it), although I’m not obsessed by technique as such and shy away from “tricks” such as sprinkling salt, or sponging-in foliage; they can look too mechanical and decorative. I feel I’m taking the first steps on a journey which will last a lifetime. Knowing that I shall never reach my destination, I look forward to the changing scenery along the way.

KEY DATES
1952   Born in Hitchin, Hertfordshire, UK
1987   Began working with Architects
1989   Began architectural illustration
1990   Elected a Member of the Society of Architectural Illustration
2000   Made a Fellow of the Society of Architectural Illustration
1989-present            Architectural illustrations for high-profile projects including Chateau Latour for the World Atlas of Wine, the Mary Rose Museum in Portsmouth, “The Palm” and “World” islands in Dubai, palaces for Middle-Eastern Emirs and Princes, flagship stores for Louis Vuitton (one of which was used for a postage stamp in Germany) and many prestigious hotels and resorts worldwide.
2010-present            Began painting in earnest, demonstrating watercolour to Art Societies and Universities; a demonstrator for Winsor & Newton. Exhibiting at local and London galleries.
2013   On the judging panel for the International Watercolour Society 2013 competition.
2015 Winner of the International Watercolour Society (UK) competition. 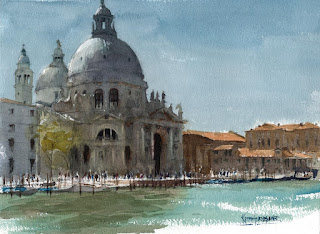