Born in 1961 in Northern Malaysia, Calvin Chua Cheng Koon is a veteran in the Southeast Asian art scene. Calvin has been a full time artist since his graduation from the Kuala Lumpur College of Arts in the early 1980s, and has been actively participating in many international art events and exhibitions across the world ever since.

His works have been featured in shows in many countries such as  Belgium, China, Brazil, Sweden, Hong Kong, Korea, Japan, Singapore, India and Indonesia. Calvin is also the recipient of the Malaysian Young Contemporaries Award and Yayasan Seni Selangor Award, and is an active member of various art societies including the Malaysian Watercolour Society where he serves as the Vice Chairman, the Singapore Watercolour Society, and more.

Skilled in various media including watercolour, oil, acrylic, and ink, Calvin’s subjects range from people to scenes, and his works are often centred around the daily lives of the Malaysian community and their daily interaction with nature. Such central theme is evident from his recent works, aptly themed the ‘River Series’, pieces of which feature local Malaysians playing and living by the rivers.

Calvin is also an avid traveller and often draws inspiration from his travels. To date, Calvin has held eight solo art exhibitions, and his art works are collected by many organisations and bodies, including the Central Bank of Malaysia, Deutsch Bank, PricewaterhouseCoopers, the Jordan National Gallery of Fine Arts, and more. 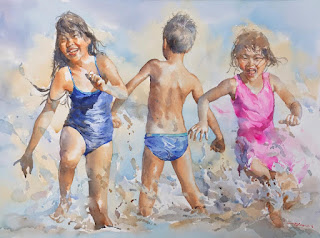