Stanislaw Zoladz, swedish watercolorartist was born in Poland 1952. After his study at Academy of Fine Arts in Cracow(1972-1978), he moved to Sweden 1978. Nature is a predominant theme in his works of art. All his paintings have one thing in common - it is his impression of light. 22500 artists submitted their work to Winsor & Newton’s “Our world in the year 2000” contest. Stanislaw won second prize, and received his award from Prince Charles, at the ceremony in St. James’ Palace in London, on February 17th, 2000. He recently received Excellence Prize at Shenhzen Watercolor Biennial China 2013 and a recognition for his realistic painting at the World Watermedia Exposition Thailand 2014. He was one of 23 finalists at 1st World Watercolor Competition at Narbonne France organized by the art magazine “The Art of Watercolour” (2014), and he participated at “Ambilight” The First Zhongshan International Master’s Watercolor Invitation Exhibition (2014).
More recently he has participated in “Masters of Watercolour” St. Petersburg, Russia, January 2015, in “The Third International Watercolor Masters Invitational Exhibition” Guangxi China November 2015. Every year hi uses to be invited to participate in Master’s exhibition - previously “Akvarell I främsta ledet” that became - “World of Watercolours”


He has had many solo and group exhibitions and he is represented by galleries in different parts of the world. 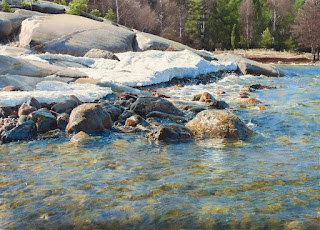